“If a child can't learn the way we teach, maybe we should teach the way they learn.”
-- Ignacio Estrada

I was excited to receive an email from a "local" app developer. Not that I don't LOVE talking to those of you from Canada, California, Seattle, or the UK, but I was beginning to think that the mid-west was 20 years behind (kind of like the old Mark Twain saying about Cincinnati). After a little research, I was surprised to see that there are some developers within a days drive of Cincinnati doing some pretty cool things. This is one of a few app I received from 965 studios out of Columbus, OH. 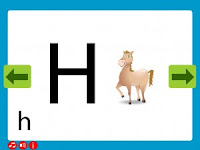 The app is a very simple alphabet app that displays both the upper and lower case letter and a drawing of something that starts with that letter.The letters are not next to each other and will swap places when touched. A green box and arrow give the visual cue to "touch here" to go to the next page. If the user touches the drawing, the upper and lower case letters move side by side and photographs appear. The photographs are clear and focus on the word versus having a lot of background in the picture. I think the use of the photos are what set this app apart from other ABC apps out there that I have seen and used with my students. Another benefit to this app is it incorporates the plural form of some words. For example, it shows a picture of on dog, and says dog. Then it will show a picture of 2 dogs and says dogs. The voice of the narrator is pleasant and I think that it would be better received by students than an adult sounding voice. The app gives the option of voice sound on/off and music on/off which is a plus when working with students who can be easily distracted. My preference for this app with voice on, sound off. 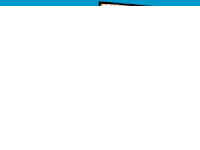 Additional IEP applications
There are several applications for this app when working on IEP goals. First, it is a great app for reinforcing letter naming and letter identification. Students could use the voice on during teaching or exploring the app, then teachers could turn voice off when asking students to identify letters. Another application would be to use this app to increase language through picture identification. Again, this is where I would use the voice on/off similar to the letters during teaching and assessment. Lastly, I think this app would be great to use when working with students on plurals or simply working on placing the 's' on the ends of words even if it isn't the concept of "more than one".

Suggestions
A couple of suggestions for this app:


Conclusion
Although I did not have time to use it with my students (I downloaded it the last week of school...and teachers and parents you know how that goes!), my own kids (ages 3 and 5) enjoying playing with it. Once I use it with some of my students next year, I will be sure to update this.
In conclusion, this was a very well put together. It was simple and it didn't have tons of "interactivity" as some of the the other apps I have tried, but that it what I liked about it. The drawing and photographs were clear and focused on the object with not a lot of background to distract the user. Each page showing simply the letters and the pictures makes it a great asset to the students with whom I work. I think this app is appropriately priced at $1.99. Oh, I think I just thought of an idea for an Alphabet Photo Machine 2.

Who's been stopping by?